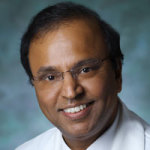 Dr. Natarajan Ravendhran graduated from Stanley Medical College in Madras, India in 1973. In 1975, he moved to the U.S. and a year later completed a Surgery Internship at Church Hospital in Baltimore. He completed an Internal Medicine Residency at St. Agnes Hospital in Baltimore in 1979. He finished a Hepatology Fellowship at the University of Miami in 1980 and a Gastroenterology and Liver Disease Fellowship at the University of Missouri Medical Center in 1982.